Gambian reggae singer, ‘Jah Hero’, is hitting the European reggae scene with storm. After releasing his debut solo album ‘Chants of Freedom’ in March 2016,  no less a figure in the global music scene than ‘Chuck Fenda’ from Jamaica asked him to be the opening act for his spring tour. Stopping by in several cities throughout Europe, Jah Hero left an impact on fans, promoters, Dj’s and the international press, with several voices already calling him ‘The next big African Reggae Star’.

It is two years since Jah Hero left The Gambia, and moved to Berlin, Germany, to take his career to the next level. After recording his debut solo album at TomTom Studios in Berlin city for over one year, he has now released his greatest work so far.  The album features 14 songs all together, including some dub and jungle remixes, as well as a few live band recordings.  The main genre is a mix of Roots Reggae, influenced by the singer’s African roots, with catchy melodies, and social, well-written lyrics.

This album is an absolute must have for any reggae fan, and will even entice the interest of those who generally listen to other genres of music, due to its eclectic compositions, and arrangements. One of the biggest tunes on the album nonetheless is a Dancehall track called ‘Burn Down Rome’, packed with African music elements.

Jah Hero not only gives Dancehall a new meaning by merging it with African drums, but also shows how a positive vibe and a meaningful lyrical message can fit any style of music.

The Gambian star is currently performing with his band ‘Solid Vibrations’ in Germany, and has been confirmed for the Africa Festival in Stuttgart this coming July.

Surely, he is a phenomenal Gambian youth, leaving his mark of positivity and unity in the reggae scene of Europe and internationally.

In an interview, Jah Hero said that his roots are what keeps him going, what makes his sound authentic, and his message true to his beliefs.

‘It is my aim to make music take people further. I love Reggae music, it is my passion just as the Rastafari Movement. But I am a Gambian, an African, and I must sing for, and represent, my people wherever I go in the world. It is my mission to sing for them, and share our valuable culture, and the power of unity amongst all of us’. 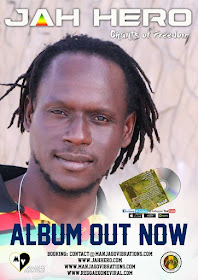 “Chants Of Freedom” by Jah Hero [Manjago Vibrations]
I say that I was kind of trying to make up my mind about what I fully thought about “Chants Of Freedom” an album from an artist by the name of Jah Hero who, I think, was fully unknown to me prior to hearing it, but these days – I’m convinced. Hero originally comes from out of Gambia but these days calls Germany home (yet another big talent from out of both Africa and Germany) and he, seemingly, pours all of his surely diverse life-experiences all over this album which prove to make for one SOLID set. A pair of big songs set themselves apart on “Chants Of Freedom” for me in ‘Rise’ and ‘Chanting’ but not too far behind (if at all) are the likes of ‘I Care’, ‘Good Ways’ (which I’m considering going back to place in the first group) and others. This isn’t THE best album I have ever heard, but if you enjoy modern Roots Reggae with just a dash of an old[er] school sound, you’ll thoroughly enjoy “Chants Of Freedom” and definitely biggup Jah Hero for the big new album.
Source: Achis Reggae

You can read the full article on Reggaestory.de 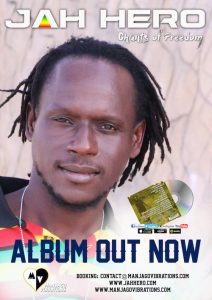 ew Album ‘Chants Of Freedom’ Is OUT NOW!!!

Get Your Copy Online Here: